Add to favourites Add to compare list Shipping and Payment

The method belongs to the techniques of photobiomodulation of irradiated tissues, where electromagnetic waves can penetrate through the skull barrier and stimulate the production of energy in neurons, which increases their cellular energy reserves and provides the possibility of their good regeneration. In addition, 810 nm is the investigated waves for photobiomodulation of the brain. 660nm is well studied for improving blood circulation in irradiated areas. Both 810nm and 660nm waves energize cells and stimulate ATP production. Neurons with sufficient ATP energy are regenerated from damage. 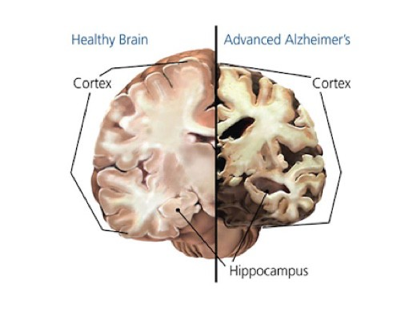 FIG. It shows the difference between the brain of a healthy person and a person with a developed neurodegenerative disease. The process can also be called brain drain. The right side has lost part of its volume and the number of living neurons is significantly reduced in it.

This means that the brain on the right is almost completely dead ... and cannot create new memories or keep them.

And if someone has been diagnosed with Alzheimer's disease, this is what their brain will look like.

But when you look at the brain on the left, you will notice how full it is to live and look healthy.

There is a possibility of regeneration and transformation back into a healthy brain ... like the one on the left side of the picture.

This is possible with tPBMT - transcranial photobiomodulation of the brain.

And it's not just about helping people with Alzheimer's, but many other illnesses.

tPBMT can also help with:

Photobiomodulation experts believe that this transformation is achievable ...

The health, function and regeneration of the brain depend to a large extent on the energy source of its cells - mitochondria.

Research has shown that by stimulating your brain with carefully adjusted light, mitochondria can be revitalized.

At the same time, nerve connectivity is increased and blood circulation in the brain is improved. Therefore, PBMT improves overall brain health.

So where and how to start?

Start using the RLT helmet from our range of devices. Combines red and NIR waves.

NIR is the wavelength with the most penetrating infrared rays, which can penetrate 5 to 10 mm into the tissues of the human body. Infrared light can penetrate the head and enter the brain, which helps speed up blood circulation, increase metabolism, feel relief and increase the activity of brain cells, resulting in massage and detoxification effects. The red LEDs also emit light energy, which is absorbed by the hair follicles to increase the rate of cell metabolism, and by reactivating the follicles, hair growth is stimulated. It also affects the blood vessels in the area of ​​the scalp and the flowing blood in this area, improving the complex properties of the blood.

The possibility of influencing and improving the disease is as follows:

The device consists of:

We keep all goods in stock so that we can deliver them to you within 5 working days.

News and actions by email

Be the first to know about special discounts and actions. You can unsubscribe at any time.
I agree to the processing of personal data for the purpose of receiving news
Cookies settings
Added to Cart
Quick contact
Watch availability
Installment calculator
Verified review
review-item-tooltip
Forgotten password
Change password
Log In